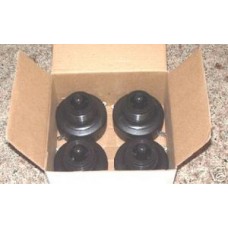 You're purchasing FOUR 100-Watt ULTRASONIC TRANSDUCERS.  Frequency range is 10kHz - 30kHz. This is for those who need more power. FOUR TO EIGHT 100W transducers can be powered directly from any 240W extended frequency Audio Amp. Regular amps will work also, but only at frequencies below 20kHz. Impedance is 50 ohms and it also has 1 3/8"-18TPI thread so that various horns can be attached. These can be mounted in 1.35" holes drilled in a flat piece of wood or acrylic to make a powerful array. And for L-RAD experimentation, a hexagonal 3, 5, 3 array can be used with half of them powered with one signal and the other half with another ultrasonic signal. We also have SWEEP FREQUENCY generator IC's to provide frequency source for the power amp.

Can be used for experimenting with ultrasound and as a Phasor pain field generator (by continuously sweeping frequency). That can be triggered by a trip wire or other sensor, and used as a security system to repel two or four-legged trespassers. The sweeping ultrasound can cause certain adverse effects like paranoia, severe headaches, disorientation, nausea, cranial pain, upset stomach, or just plain irritating discomfort. Great for animal control. Frequencies below 21khz affect humans, and above 21khz are for animal control. Horns are NOT included.

Nimbly holding a big black plate, Norris stands with me in an A.T.C. sound chamber. "LRAD(tm) can instantaneously cause loss of equilibrium, vomiting, migraines -- really, we can pretty much pick our ailment," he says brightly.