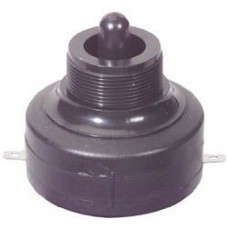 This is a very versatile 100-Watt ULTRASONIC TRANSDUCER. Most ultrasonic transducers are flat which makes them difficult to use with horns for ultrasound transmission in the air, but this transducer is molded in a plastic enclosure which makes it easy to use for that purpose. Frequency range is 10kHz - 30kHz, and it can be powered directly from any 240W extended frequency Audio Amp. Regular amps will work also, but only at frequencies below 20kHz. Impedance is 50 ohms and it also has 1 3/8"-18TPI thread so that various horns can be attached. We also have SWEEP FREQUENCY generator IC's to provide frequency source for the amp, and 240-Watt Extended Audio Power Amps.

For ranging, depth and distance measuring, could be used with a Basic Stamp 2, OOPIC, Basic Micro, Basic X24, PIC, or other microcontroller, using a suitable driver. The transducer can be used for both, transmitting and receiving. Just transmit a pulse or voice communication, and then switch to connect the transducer to an amplifier, to hear the response.

The transducer can also be used with Stepped Horns which can concentrate the ultrasound beam much better than other horns, for experimenting with welding and cutting thin plastics. For example, a 10" diam. stepped horn will magnify sound as much as a 100" diam. exponential horn. And using horns also increases directivity (narrower beam) and distance to which it'll reach.

Amplifying Ultrasound:
Many Ultrasonic transducers produce motion with an amplitude that is too small for applications like ultrasonic welding, machining and liquid atomizing. In such applications it is common to amplify the mechanical motion by using resonant tapered horns, and the horn shape mostly used is an exponential one. But a less known stepped horn can also be used, which can produce greater magnification and is easier to make, either from two concentric aluminum tubes or easilly machined from a single bar of metal. Below is a link to a picture, and we'll send a link to a detailed article about stepped horns (which includes design math) upon request from a winning bidder of this auction. Stepped Horn Info

You will also get a 7.5 x 6" horn that screws right on the transducer: