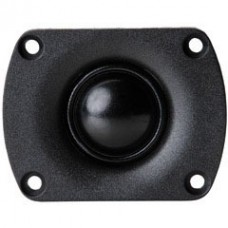 This sale is for FOUR 75-Watt (peak power) ULTRASONIC TRANSDUCERS.  This is for those who need more power. Up to FOUR of these 75W transducers can be powered directly from our 240W Amp or 100W Generator.  Frequency range is 10kHz - 30kHz, and it can be powered directly from any 240W extended frequency Audio Amp. Regular amps will work also, but only at frequencies below 20kHz. Impedance is 4ohms .

If used with our 100W Ultrasound generator, it should be used with a 4 to 20-ohm series power resistor, or use at least two transducers in series. That's because it has low impedance so it will overheat when driven from 12 volts. Four of them can be connected in series-parallel for more power.

It is WATERPROOF so it's perfect for outdoor use or even experimenting with underwater communication. We dunked one, and it worked while under water for half an hour without a problem. BTW, it's as powerful as 25kHz ceramic transducers that we used to sell and which were from NAVY submarines where they were used in arrays as sonar. These might work for that purpose also, although I wouldn't dunk them deeper than about a foot.