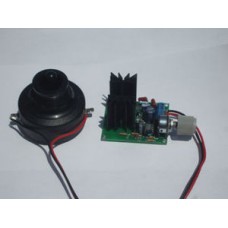 Many of our customers use this in ANTI-LOITERING Mode, which only affects TEENAGERS and discourages them from gathering on their property.

As others describe it, it's a device that provides a substantial capability to disrupt and disperse gatherings, demonstrations, speeches, crowd dynamics, etc. If deployed near the podium, it might cause one to turn into an increasingly un-impressive speaker with lacking concentration and sharpness , or perhaps even be unable to complete his speech. It also could influence loitering youths on your property to move along, saving you an effort to try remove them. BTW, we don't claim that it'll disperse large demonstrations and crowds; for that it'd probably need to be a bit more powerful. But it seems good for experimenting in smaller areas.

Other sellers sell a similar model which they call a "rarely-available government model". Whether it is rare or has anything to do with government, I don't know, but OUR VERSION produces the same frequency, and at the same decibel level (we measured it with sound level meter) like theirs, even though our version uses only one transducer versus their two. You also can add more 100W air transducers we sell, for more power, and with our 10" horns, effectiveness at longer distances. Comes with one air transducer , so you just need to provide 10V to 14V DC battery or powersupply.

So far you're getting about the same thing as theirs, at about the same price, but there's more :-) We also include a GENERATOR CHIP when you purchase this. That chip will turn this Sonic Nausea device into a TUNABLE 100W ULTRASONIC GENERATOR. It's the same one we sell for $69.95. That's like getting a $70 Ultrasonic generator for free with purchase of the sonic nausea device. Just unplug the nausea chip and plug in the generator chip, and that's all there is to it. Very handy for experimenting with ultrasound. It''ll power up to four of our 100W Air Transducers, or one 55W ceramic cleaning transducer.

Additionally, the sonic nausea chip has ANTI-LOITERING Mode, which only affects TEENAGERS, unlike the regular sonic nausea mode which affects everyone. Just pull a tab on board to switch to that mode.

Here's the description of the gen:

"New 100-Watt peak power (about 50W RMS) Ultrasonic Generator. Output is an AC square wave, but can be switched to simulated sine wave at lower output power. Frequency is variable with a potentiometer between about 10 kHz and 50 kHz. Can be powered from 12 to 36 volts DC.

Great for driving air or ceramic cleaning ultrasonic transducers and experimenting with ultrasound. Is powerful enough for a small ultrasonic cleaner using one of our 55W transducers. Depending on transducer's impedance, you may need to power it from 24 or 36 volts for full power output."